There are many examples of low temperature district heating (LTDH) systems around the world. In this text, some of these examples are described, including results in the form of measured data and lessons learned, where available.

This is mainly a literature review, meaning that the selection includes projects that have been studied, academically or in other contexts. The review is non-exhaustive. To find more information or to find contact persons, please refer to the references given in each case.

The main data presented is supply and return temperatures (design temperatures and if possible measured values), design temperatures for space heating and DHW, and technologies used to achieve these levels. The available data varies from case to case; a few are merely added for reference and completeness, although little data is available and investigating them further is not within the scope of this report. An overview of the temperature levels of the cases is given in Table 1.

Table 1. Overview of low-temperature DH case studies. Supply, return, DHW and space heating design temperatures in °C. See each case study for measured values and more information. For the spaces which are blank there is currently no available information.

In Albertslund, a municipality close to Copenhagen, about 2,200 social housing dwellings from the 1960s are being renovated between 2011 and 2015 (Olsen, 2014). About 25 % of the area consists of two-storey terraced houses, while the remaining part is one-storey one-family housing units. The houses are renovated to low-energy standard, with solar panels and PV supplying renewable heat and electricity. In order to supply the remaining heat needed for space heating and DHW, the existing district heating pipes are being replaced with a low temperature district heating system.

Since 2010, a LTDH system has been in operation in Lystrup, a suburb of Aarhus, Denmark. Lystrup Fjernvarme delivers district heating to a central point at the demonstration. The local site network supplies 40 terraced low-energy houses and one communal building with domestic hot water and space heating (Olsen, 2014; Rosa, 2012).

This demonstrator project is relatively well studied and described in literature. Some conclusions drawn are (Olsen, 2014):

A small, experimental low temperature district heating system has been in operation since 2010 in Slough, west of London. It consists of an energy center that supplies heat to nearby dwellings (in total 10 dwellings with 25 residents) and an information center (Burzynski, 2012). The system is intended to demonstrate different renewable technologies in combination with low-energy houses. 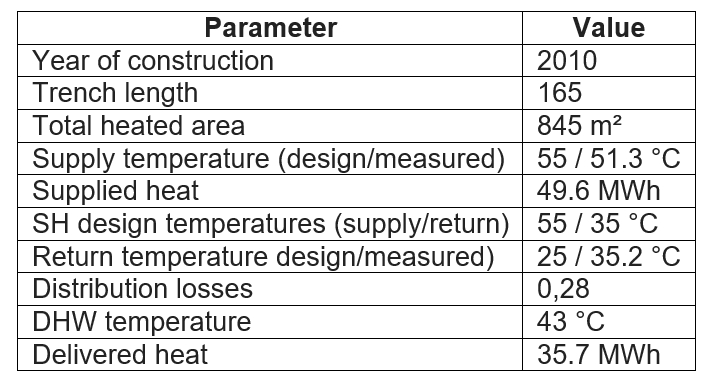 Some lessons learned from this project are (Burzynski, 2012):

A small, experimental, actively managed low temperature district heating system has been in operation since 2015 in Wednesbury, north west of Birmingham. It consists of an energy center that supplies heat to nearby dwellings (in total 24 dwellings with 24 residents) and a laundry (Cosic, 2016) (Cosic, DECC Heat Networks Demonstration SBRI COHEAT 5G Heat Network Demonstration, 2017).

“Heat networks must be available to buy as a standardised package that can be specified, installed, and operated as easily as individual gas boilers. They must deliver reduced lifecycle costs without compromising on technical performance or the consumer experience. They must achieve all this at a scale to suit new build developers and social landlords: 20-250 homes.”

This project sought to dispel the myths used to excuse over-size and over-temperature heat network designs and show how applying smarter control technology to heat networks can make them more competitive than individual gas boilers, even for small 20-250 home scale suburban developments. 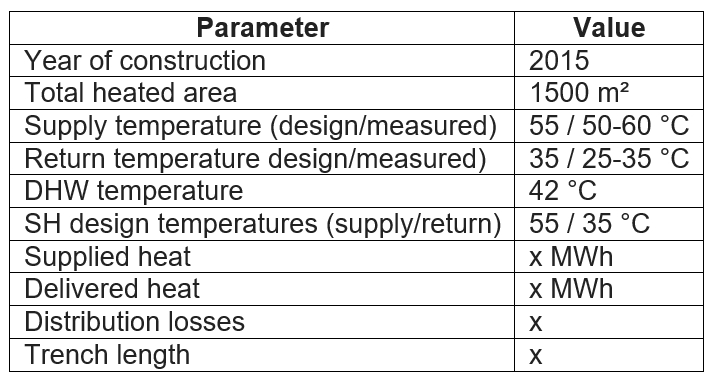 Some lessons learned from this project are:

A purpose-developed control platform was developed and applied, from utility supplies through to individual radiators, to a heat network that was downsized to the extent that it relied on this system to avoid hitting capacity constraints. This worked as expected.

The same platform was also used to partially automate commissioning (full automation was prevented by hardware limitations), provide technical service level monitoring, and provide integrated retail utility metering/billing/payment collection and account management at minimal extra cost. This level of integration from utility supplies through to individual radiators, including all user interfaces and retail back office capabilities, and all based on internet is believed to be a world first for heat networks.

Heat networks are traditionally seen as a solution for large developments in urban areas with a high heat density. This project has shown that heat networks done well – preliminary figures show distribution losses of the order just 300-350 kWh per year per home – can be attractive for suburban areas (59% of UK housing stock and more than 59% of heat demand); for developments less than 250 homes (the bulk of projects); even where heat density is low (new build and refurbished homes); and compare favorably against individual gas boilers on both lifecycle carbon and cost.

Industry practice results in oversized heat networks that cost more to build and operate less efficiently than they might otherwise. This project has highlighted where to focus and what to do about it:

By some metrics (e.g. % heat loss) peak efficiency was achieved on the pilot network the day that a filter housing split in the energy center split and the network went cold. (0% heat loss) Clearly this isn’t an acceptable Quality of Service. Keeping the entire network, including the DHW heat exchanger, fully hot all the time, means zero waiting time for DHW to reach temperature and a home that reheats as quickly as possible. It also minimizes heat network efficiency so isn’t an acceptable Quality of Service either. Somewhere between this and an energy center failure is a happy medium.

In Høje Taastrup, Denmark, the old district heating system has been replaced in an area with about 75 detached houses in an area called Sønderby. The existing system was only about 15 years old but had distribution losses at levels of 38-44 % (Olsen, 2014). The new system was connected via a shunt connection to the main network, which has a supply temperature of about 80 °C and a return temperature of about 50 °C (Christensen, 2011)

Shunt connection to the main district heating system through a “3-pipe connection shunt arrangement” (Christensen, 2011). This solution allows the return water from the main network to be used as primary water in the low-temperature network, but the main supply water can be mixed in to raise the temperature if necessary. The “main network return water” ranged from 30 to 67 °C (47 °C on average) in 2012-2013, whereas the “main network supply water” ranged from 65 to 107 °C (80 °C on average) (Olsen, 2014). Thanks to this solution, the new system was supplied with return water up to 81% of the time.

Some lessons learned reported from this project (Olsen, 2014):

In Tilst, a suburb of Aarhus, a street with eight houses has been retrofitted with low-temperature district heating. The focus of this project is on how existing houses can be prepared for low temperature district heating. For this reason, the existing pipes in this street were replaced with new ones, and the temperature was reduced through the use of a mixing shunt at the connection to the main network (Olsen, 2014).

The system is connected to the main district heating system through a mixing shunt.

A new area of 130 dwellings is situated in Västerås, Sweden. All houses will have district heating, and their energy demand is low because of energy efficient building techniques. In some of the buildings, some household appliances will be supplied with heat from the district heating, such as white goods and towel warmers (Andersson, 2010) (Lauenburg, 2014).

In some of the buildings, some household appliances are supplied with heat from the district heating system, such as dishwashers, washing machines and towel warmers, adding 1,000-2,000 kWh/year per dwelling (Energistyrelsen, 2011). This increases the heat demand of the district heating network, which makes it more cost-effective. It also decreases primary energy use.

In Norway, a new passive house project with 66 dwellings, consisting of both apartment blocks and terraced houses, was built between 2012 and 2014 (Olsen, 2014). The houses will be provided with space heating and domestic hot water heating from a ground-source heat pump system, distributed by a small-scale district heating network (Alonso, 2013).

In Okotoks, Alberta, in Canada, 52 energy-efficient detached houses are supplied with a small LTDH system. Heat is supplied with 2,293 m² solar collectors located on garage roofs, plus natural gas-fired peak load boilers. Both seasonal storage (boreholes) and short-term storage (water tanks) are used. The system supplies the houses with space heating only; DHW is produced independently with solar collectors with back up gas-fired water heaters. This allows for a very low district heating supply temperature.

In Linköping, the energy company Tekniska Verken operates three low-temperature networks, and more are being built (Eriksson, 2013). The supply temperature is 60 °C. Heat is supplied with steel pipes with more insulation than in standard systems. Costs are reduced through smart planning, for example by laying pipes before foundation work is started. Both indirect and direct connection of space heating systems have been used, but in contrast to several Danish low-temperature systems, Tekniska Verken has seen no advantages with direct connection (Lauenburg, 2014).

In Venning in the city of Kortrijk, Belgium, a passive house area of 64 single-family houses and four multi-family houses (82 dwellings in total), built in 2010-2014, is supplied with low-temperature district heating (Kortrijk,, 2013). A 1 MW woodchip boiler supplies heat to the system and a water tank is used for short-term storage. The design temperatures are 50/25 °C supply/return (Piers, 2013). Space heating systems are indirectly connected. Domestic hot water is produced at 45 °C using DH storage tanks.

In Ludwigsburg, Germany, an area with low-energy (passive) houses will be supplied with district heating using a concept called “LowEx” (Schmidt et al., 2014). The system is a subgrid of a main grid, where the return temperature of the main grid is used as the supply temperature in the subgrid, at about 40 °C (return temperature 20 °C). The intention is to match ”exergy demand” and ”exergy supply”. Furthermore, thermal solar energy will be integrated. The plan is to supply the main district heating system with a CHP plant and a geothermal heat pump.

In the housing area “Zum Feldlager” in the city of Kassel, Germany, LTDH is being investigated (Schmidt, 2014). The area consists of 140 new low-energy houses (annual specific heat demand 45 kWh/m²). CHP and a ground-source heat pump are options investigated for supplying heat, together with heat storage. DHW is planned to be supplied with solar thermal systems, backed up by electrical heaters, which enables a very low DH supply temperature of 40°C. For the distribution system, plastic pipes are foreseen, reducing both investments and installation time.