By utilizing sea water and waste heat for cold production, emissions as well as electrical consumptions has been cut with 65-70%!

Öresundskraft is a publically owned energy company in the south part of Sweden. The company provides district heating and cooling to apartments and commercial buildings in the city of Helsingborg (about 110 000 inhabitants) by utilizing waste heat mainly from the waste fired power plant Filbornaverket. In 2017 Öresundskraft started to expand their current district cooling grid by installing an absorption chiller at Västhamnsverket in Helsingborg to deliver more cooling and thereby replacing individual (electrical) chillers with district cooling. 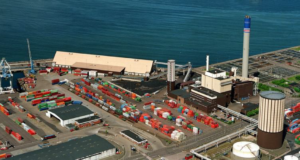 Öresundskraft begun its district cooling operation in 1999 and since has the demand grown steadily. Helsingborg have especially found an increased cooling demand from offices and commercial buildings. To meet the increasing demand Öresundskraft decided to invest € 2.93M in an expansion of the current district cooling system and a modernization of production facilities. It was expected, that the fully implemented district heating system would reduce both electricity consumption and environmental emission between 65 and 70%, compared to traditional and individual cooling system.

Absorption chillers are primarily powered by heat and not by electricity. Adsorption cooling is a cost-effective and environmentally friendly technology for producing cold. It is suitable for cities with high electrical price and plenty of available cheap waste heat. Considering that summertime peak electric demand is largely driven, in southern Europe especially, by cooling, the advantage in the development of these systems is also in terms of shaving electric energy demand peaks. To implement this type of system the amount and temperature of available waste heat should be considered, preferably the temperature of the heat is at least 90 °C all year long.

Other advantages with district cooling compared to other technical solutions for cooling (e.g. individual chillers) is that the amount of cold provided to the end user can relatively easy be increase if the demand increases. Besides that, the district cooling is also a well-known technic and the system requires low work effort and maintenance [1].

The idea, the system and technical requirements

Besides a new absorption chiller, the project also included installation of a sea water collection tank to provide free cooling to the machine. The new tank was installed in the spring of 2018 for supply and distribution of sea water. The new installation was in place in the end of June of 2018 and in July the production of district cooling in Helsingborg increased with 214 % compared to the same month the year before, i.e. the production increased form 1686 MWh to 3620 MWh.

The district cooling plant utilities free cooling from the sea by first pumping the water into the tank and then filtering it before passing through a heat exchanger system, i.e. a plate and frame heat exchanger of titanium, to cool the cooling distribution system. Within the system, sea water cooling can either be used for “free cooling” (in winter), or for cooling the absorption machine (condenser and absorption) while it simultaneously also pre-cools the warm district cooling return water, before the absorption chiller.

The system is designed such that free cooling from the sea provide cold directly to the network until the temperature of the sea is too high. At that time the absorption machine is started. As the cooling demand is usually higher in summer than during winter and the heating demand is lower during summer the absorption machine utilizes excess capacity in the district heating network to produce cold for the local offices and buildings.

In summer, the district heating network’s heat source is a waste fired boiler, that need to be operated to take care of the waste, despite the low heat demand. Waste is difficult to store from summer to winter, without undesired biological activity. The combination with cheap excess heat and a heat driven chiller is most beneficial in systems where a significant fraction of heat is provided by industrial heat recovery systems, waste incineration or cogeneration plants that produce large amounts of heat also during the summer period.

In Helsingborg, the total amount of waste heat is about 50 GWh. Even with the new installation there are still some waste heat that is cooled off using large dry-cooler or free cooling. To utilize the waste heat even more efficient, Öresundskraft is considering installing a second absorption chiller and/or a geoenergy seasonal storage.

The temperature of the sea usually has small variations, and the seasonal variations was in this case managed by adjusting the size of the system to suit the highest predictable temperature. At high temperatures the amount of sea water required to cool the process increases, therefore the water flow can be adjusted. Besides that, there are also two control valves on the cooling system to adjust for variations and stabilise the system.

The unpredictably high sea water temperatures during the summer of 2018 resulted in a little lower cooling efficiency of the absorption chiller. This did not affect the performance of the machine, but it made difficult to pre-cool the district heating return flow. To prevent this from happening again the size of the system for cooling down the district heating return flow was increased at the end of the testing period.