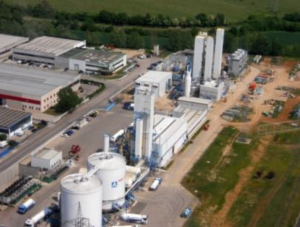 The district heating project desired to exploit residual heat recovered from the local industry Air Liquide. The excess heat is extracted through a heat pump and delivered to a newly established district heating network, supplying both a public school and a sports centre. Air Liquide is a multinational company producing industrial gasses. In Castelnouvo del Garda, the company delivers oxygen for the steel industry. Many of their processes have cooling needs and accordingly produce excess heat, which can be extracted instead of being emitted to ambient air.

The excess heat is distributed through 3300 m of pipeline, before it reaches the end-users. The main sections of the district heating network are designed with up to five times the capacity which can be taken from Air Liquide. The route of the network is hereby optimized with future expansion possibilities to residential housings in mind. A second phase of the district heating project in Castelnuovo del Garda is to expand the grid with 3500 m of pipeline and construct a biomass power station with cogeneration of heat and electricity. The total scope of the project is to connect a further of 200,000 m3 of public and private sector buildings.

Heat recovered at Air Liquide will lead to energy savings equivalent to 140 ton of oil every year, corresponding to around 327 tons of CO2-equivalents being saved.