The benefits of High temperature district cooling are the following: 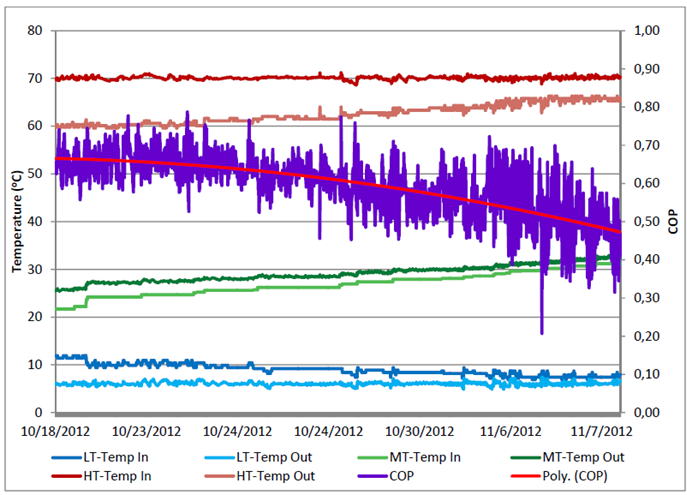 Figure 1. Different supply and return temperature for the district heating run by the absorption cooler. 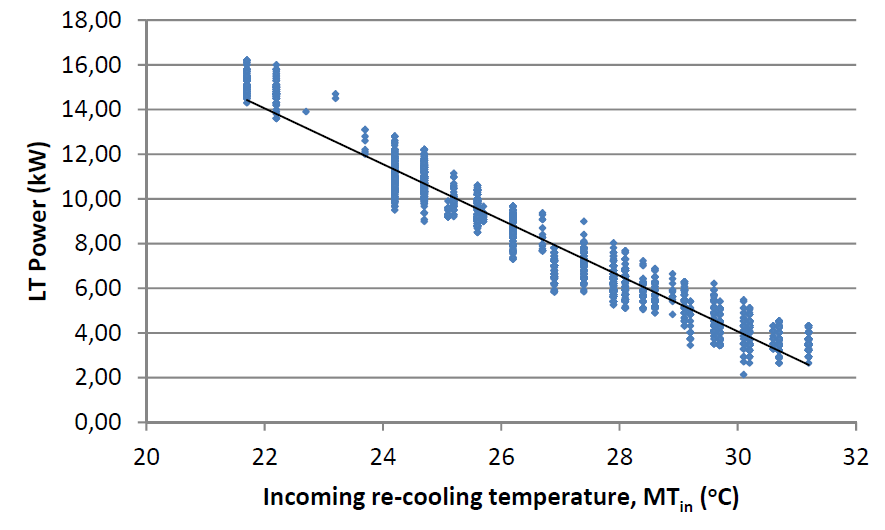 Figure 2. Relationship between power for the absorption cooler and the recooling temperature. 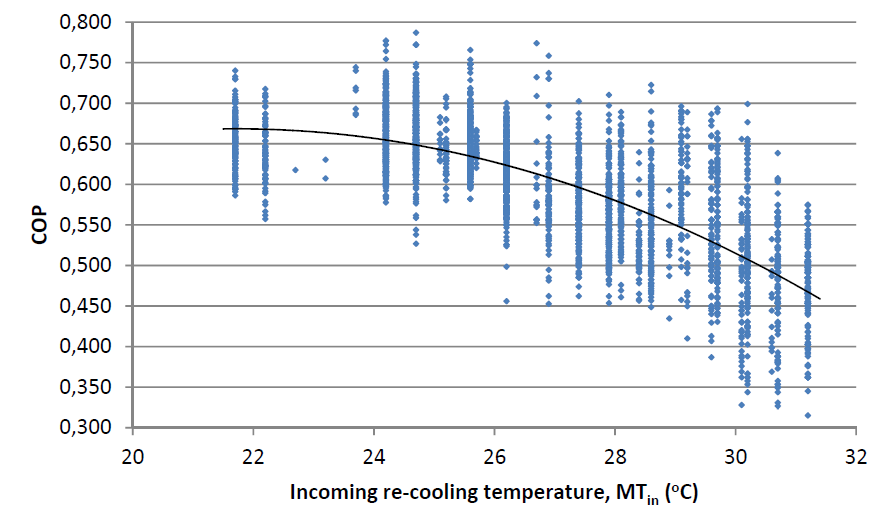 Figure 3. Relationship between COP for the absorption cooler and the re-cooling temperature. 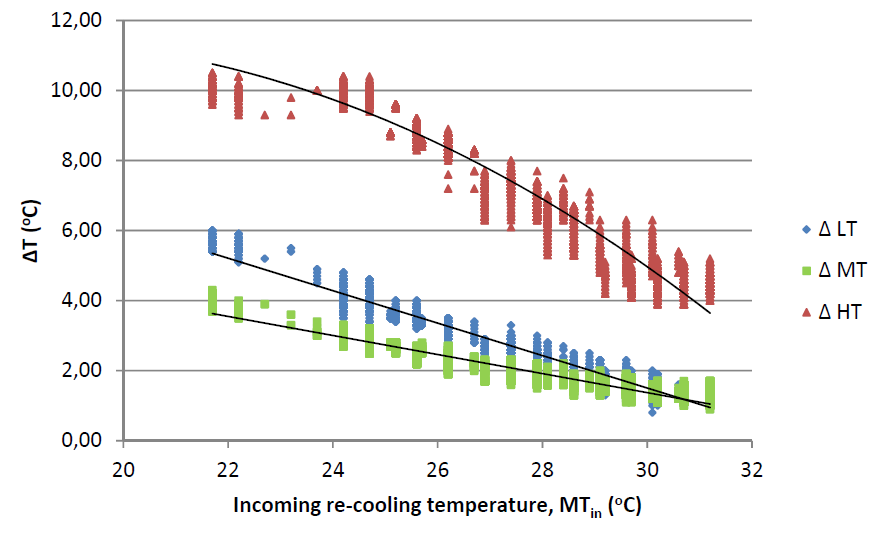 Figure 4. Relationship between delta temperature for the absorption cooler and the re-cooling temperature.

Figure 5. Relationship between COP for an absorption cooler and temperature of the heat source.

It is important to have a discussion with the manufacturer of the absorption cooling machine to have it designed for the specific situation where it will be used. Design parameters that might be important are the heat exchangers and controlling systems for pumping internal and external flows.

In a case study in Malmö (Göransson, 2009) sorption cooling was evaluated under temperatures relevant to HTDC. The supply temperature was 15 °C and the return 22 °C with a COP of 1.5. A Life Cycle Cost analysis was made, and the sorption cooling alternative was found to be the least costly way of producing cooling for the building. The investment cost was high but the variable cost was low, which made the total cost lower than for the alternatives. The sorption cooling equipment works better with low grade district heating than absorption cooling.

The principle for free cooling is to make use of cooling that is already available. This might be from the bottom of a lake or ocean where the temperature normally is 4 °C, from the air during winter or from some other source.

The figure below shows the production of cooling in the central district cooling network in Gothenburg that uses free cooling. During the winter most of the cooling comes from free cooling in the river. When the river water temperature is not low enough or more capacity is needed, absorption chillers and chillers with compressors which are chilled with water from the river is used. 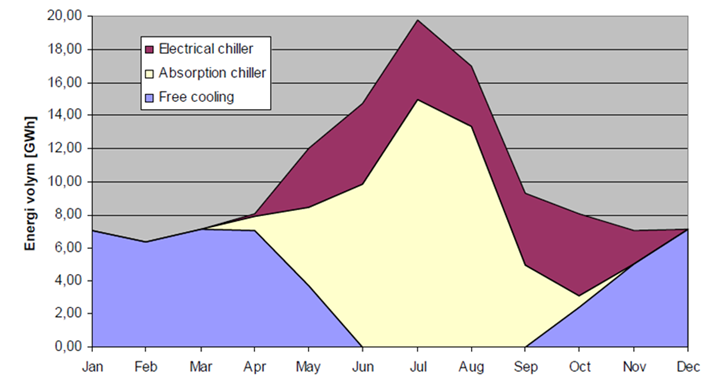 District cooling is mostly used in offices, shopping malls, server rooms and other large buildings (such as hospitals and concert halls), but could also be of interest in residential buildings. The two main ways forms of cooling in a building are through thermo active systems and through airborne systems. An important aspect for both of these applications is that special care must be taken for the dew point by for example using small fans to decrease the dew point. For thermo active systems, the surface temperature must be above the dew point, which is around 19 °C – in order to avoid issues such as mold.

Thermo active building systems (TABS) (Perino, 2008) (Weitzmann, 2004) are systems that make use of the thermal mass of the components of a building such as floors, ceilings and walls. These components are heated/cooled either by ducts for circulation of air or by embedded pipes for the circulation of water. Nowadays, most installations consist of waterborne systems. A characteristic of waterborne high temperature cooling systems is that the total chilling area must be large, which is very similar to the low temperature heating systems. One possibility for reducing installation costs is to use the same system for heating and cooling. In such cases, special care needs to be taken for comfort issues. Waterborne systems can be installed in the floor, ceiling or walls where the typical distribution/return temperatures are around 15/17 °C (Persson, 2000).

A solution called “Concrete Core Conditioning” involves a combination of floor and ceiling cooling. This could be very beneficial for multi-storey buildings by having waterborne systems in the slabs between the storeys. Such systems have the advantage that due to the thermal mass of the slabs; the energy need is spread evenly, thus reducing the peak power and is therefore very appropriate for free cooling. This technique can be used to combine heating and cooling with a single distribution temperature if the building has low cooling and heating demands. Another advantage is the decreased need for advanced control systems. A drawback is that the indoor temperature may vary by up to 5 °C (Persson, 2000). The surfaces of the ceiling and the floor must be uncovered to ease the heat exchange.

Fan coils are used for the same purpose as chilled beams. The difference is that larger cooling power can be reduced depending on the use of a fan. There is also a possibility to reduce the moist content in the air if the fan coil has a condensate drain. To reduce the moisture content of the air, the cooling media needs to have a temperature below the dew point. The lower the cooling media temperature is, the more moisture can be removed from the air.

In many buildings in cities with district cooling, there is a need for process cooling. These systems have special cooling demands, depending on the process. It is possible to use higher temperatures in the cooling media, depending on the end temperature for the end user. Larger surfaces for heat exchanging will be needed. If the end user need for cooling is at a lower temperature level, district cooling can be used to reduce the heat from an extra cooling machine for the equipment.