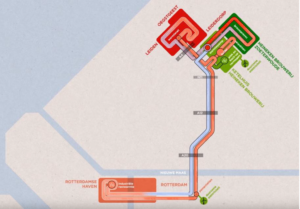 Figure 1. Transmission of industrial residual heat from the port of Rotterdam to the greater Leiden area.

The project Warmtelevering Leidse Regio (WLR) involves transmission of industrial residual heat from the port of Rotterdam to the greater Leiden area. A project agreement was signed in November 2017 which enables a sustainable heating solution to the local community. Low-temperature return flow is used through a heat pump at a nearby local brewery.

The WLR project is a commitment between the heating transportation company Warmtebedrifj Rotterdam and the energy company Noun. By supplying the greater Leiden area with industrial residual heating from the port of Rotterdam, approximately 13,000 households and 200 companies can potentially be supplied with sustainable heating. The project involves a major transmission line, where a total of 43 km pipeline ensures heat distribution from the port to the town and back again.

The high-temperature residual heat is transported from the port of Rotterdam via a pumping station powered by electricity. The heating is transported to heating centrals in Leiden, where it is dispersed to the already existing district heating network. The return flow still holds a large energy potential, which is harvested at the brewery Heineken. Here the residual low temperature heat from the return flow is used to produce hot steam for brewing processes. This is done through an electrically powered heat pump. Cooled water is returned to the port of Rotterdam, where it again is heated by industrial residual heat in heat exchangers.

The heat pump at the brewery is a main part of fully utilizing the potential of excess heat from the port of Rotterdam. By extracting heat from the return flow, the temperature of the returning transmission pipeline is lowered, making room for more energy to be harnessed at the ports. Hereby the overall energy efficiency of the system is optimized. The transmission system is unique and expands across multiple highways in an already existing urban environment. Further, a buffer tank at the heating central supply the brewery and hot water is used for packaging processes.

The transmission system results in immense CO2 – and energy savings, as great amounts of natural gas can be substituted with already existing residual heating. Currently, large amount of energy is lost to the ambient air from industries at the port of Rotterdam. By constructing a transmission system the potential energy can be harvested. A heat alliance between the province Zuid-Holland, Havenbedrijf Rotterdam, Gasunie and Eneco en Warmtebedrijf Rotterdam is planning a larger regional heating system. The goal is to connect 500,000 households and multiple greenhouses in a large regional district heating network, potentially reaching CO2-savings of 1 million tonnes annually.