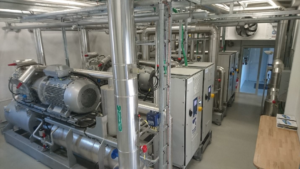 The main purpose of utilizing excess heating from the local industry was to replace the former natural gas based production units. By doing so, both economically and environmentally benefits are obtained, due to lowered heating costs and reduced fossil fuel consumption and hereby reduced carbon emissions. The waste water from the dairy processes is low-temperature and was previously discharged into a nearby stream, but holds a large energy potential with temperatures between 22 and 25 degrees Celsius. A 1.6 MW heat pump utilize the hot waste water and cools the water to approximately 5 degrees Celsius, before it is discharged into the stream. This further derive positive environmental benefits.

Rødkærsbro Fjernvarmeværk have approximately 600 consumers and an annual heat production of 15,000 MWh. Of this, approximately 6500 MWh is delivered as baseload from the biogas engine, due to it being the cheapest heating production unit in the system. Another 6500 MWh is delivered from the waste water heat pump, while the remaining 2000 MWh primarily is bought from a small biogas plant. The heat pump is constructed as two serially connected heat pump units. District heating water is heated from 38 to 52 degrees Celsius in the first heat pump and further increased to 70 degrees Celsius in the second heat pump. At the diary, a heat exchanger cools the industrial waste water though an intermediate circuit, before the waste water is transferred 1800 m to Rødkærsbro Fjermvarmeværk. The temperatures delivered to the heat pump is approximately 20 degrees Celsius and returns to the heat exchanger at Arla at approximately 3 degrees Celsius. Waste water temperatures are constant throughout the year, enabling an annual COP of 4.6.

Heat pump operation begun in March 2017 and the unit have been running without major challenges since. The waste water utilization displaces great amounts of natural gas based heat production and reduce the CO2-emissions with approximately 1000 ton CO2 annually. The heat pump can produce between 40 and 45% of the total heating demand in Rødkærsbro. The total investment was € 1.8 M of which the project received a grant from the Danish Energy Agency of € 320,000. The simple payback period is expected to be 7 years.