District heating can be used in ships when in a harbour. It will then replace the internal energy supply, fossil marine gas oil, leading to massive positive environmental impact. Since 2015, this has been implemented in Gothenburg, Sweden. The environmental results include reduced emissions to air, smaller carbon footprint, and lower noise levels in the harbour’s surroundings.

This is already positive news. But the investment has also been very profitable in economic terms. The running energy costs are reduced, and the expected return on investment is less than 3 years.

Thinking outside of the boat, a harbour that is not polluting its environments means that the surroundings can be used in new ways. As an example, if there is less noise residential buildings can be built closer to the harbour, creating new land for city development. And that is probably positive in many port cities. 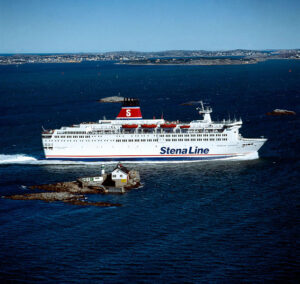 Figure 1. Stena Danica in the archipelago of Gothenburg. Attributed to: Stena Line CC BY 3.0

When virtually all other emission sources (heating of buildings, traffic, etc.) are decreasing their emission levels, ships at quay become one of the worst emission sources in Gothenburg. The main objective with this project was to implement a demonstrator that limit emissions, both environmentally regulated emissions such as sulphur dioxide (SO2), particulate emissions (PM) and nitrous oxides (NOx), as well as global warming gases (CO2) and noise from ships when docked at quay in  Gothenburg. To reduce emissions from ships at quay switching heating and power generation from the ships marine gas oil (MGO) fuelled engines and boilers to more sustainable energy sources has through this pilot project shown to be both possible and feasible.

District heating to ships in Gothenburg harbour was initiated and evaluated within the Celsius project (EU Smart Cities Celsius) . The demonstration was carried out in close cooperation between the shipping company Stena Line AB, a private owned company and the energy company Göteborg Energi AB and City of Gothenburg who own the harbour as well as the energy company.

The system was ready for operation in December 2014 and heat delivery started in January 2015 and is still on-going by the end of 2019. The system was evaluated after the first full year of operation. At the beginning it was assumed that the demand for district heating would mainly occur during the cold season. However, the environmental advantages to heat the ship’s main engines when at quay has led to a demand for district heating also during the summer. The ferry’s consumption of district heating during 2015 was estimated to 800 MWh.

From the Gothenburg city perspective, the project is a good example to show the possibilities to improve the environment by reducing both global and local emissions through a wider system perspective, including several sectors. As the ship’s engines will be turned off and kept warm by district heating, the environment around the harbour will improve and the sulphur emissions will decrease. Reduced noise from ships at quay enables housing development in port areas. From a CO2 emissions perspective this project was a huge success with a reduction by 172 tonnes/year and ship, or 63% when the ship is in port. Bunker oil is replaced by district heating with the emission factor 101 g CO2/kWh. (The emission factor for the ship depends on both type of MGO or bunker oil, type of engine and engine load. Values from 600 g CO2/kWh to 1600 g CO2/kWh can be found in literature).

The project has furthermore proven to be a less expensive heating solution for Stena Line, and the return on investment is expected to be less than three years. The total investment cost is approximately EUR 390,000, Stena Line’s part was EUR 77,000 worth in working time, and the EU financed Celsius project contribution for hardware was EUR 52,000.

Passenger ships like Stena Danica and Stena Vinga frequently moor at quay in densely inhabited areas of cities which means the environmental outcomes of this demonstrator are likely to be of interest to other cities.

For passenger ships it is difficult/impossible to provide indicative default figures since they come in greatly varying sizes and have greatly varying schedules depending on the location. But the inconvenience of determining the specific requirements to shut down the engines while at port might be worth it since it will eliminate the use of bunker oil related to shipboard and therefore result in reduced CO2, SO2, PM and other emissions, as w ell as lower noise levels.

The Ship, the idea, the system and the technical requirements

The ship (i.e. Stena Danica) connected to the network is a combined passenger and cargo ship with a capacity of hold up to 2274 passengers and 480 passenger cars. The ship operates two times daily between Gothenburg in Sweden and Fredrikshamn in Denmark with 6 hours stop at night in Gothenburg. (A second ship, Stena Vinga, has also been retrofitted and connected to district heating, but this ship was not part of the Celsius project).

Traditionally, when a ship is at quay, electrical generators and heating equipment still needs to be running, usually consuming bunker oil. In Gothenburg it is already possible to connect ships at quay to the electrical grid but to cover the on-board heating, the heat demand for thermal comfort and to preheat the ship engines, equipment such as oil-fired boilers are still required. On the ferry, there are two hot water circuits: the pre-treatment system, which is water-based and the reheating system, which is air-based. Both systems are used in the air conditioning system but also as a heat supply during the winter.

A challenge was to develop a technical solution that enables daily connections to the district heating grid. This called for a considerably different approach than the one used in regular connections of district heating to stationary buildings. It requires a flexible pipe and a system where connections can be done quickly and without any leakage of hot water. 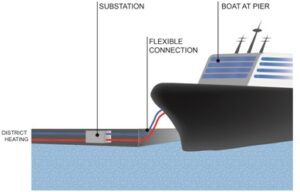 Figure 2. Schematic overview of the ship connected to the district heating network at quay.

Evaluation of the installation in Gothenburg for year 2015

To quantify the performance of the demonstrator performance monitoring system was activated in January 2015. The amount of monthly delivered heat [kWh] to the ship was recorded for estimating the performance indicators and asses them against the baseline situation that is the same ship using standard oil-fired boilers for heating purposes at quay. Positive effects have been highlighted with regards to energy, economic, environmental and social, but the most important impact is related to citizens’ quality of life since demonstrator start-up has drastically reduced GHG emissions and noise level in the harbour’s surroundings.

In numbers, the potential is quite straightforward – multiply the number of hours per year a vessel spends in port (with a minimum of two hours per instance) with its fuel consumption and the share of actual heat production from that. Apply seasonal climate corrections if necessary (if ship also has a comfort heating demand).

During the project it was noticed that the quay where the ship moored was not in the right condition for construction and needed renovation before the district heating installations could begin. The condition of the quay was not included in the feasibility study and therefore the time required for repairing the quay delayed the project with several months.

The initial feasibility study included technical information, but there were gaps in the data to be able to deduce how much installed power the ship would need. To remedy this, extensive measuring on-board the ship while at sea were made during the winter to determine the power load. The initial feasibility study concluded that 740 kW installed power was needed. With the addition of pre-heating of the ship’s main engines to 70°C, the resulting requirement was increased to 1,2 MW of installed district heating. This, on the other hand, has positive effects when starting the engine, in terms of reduced energy use and decreased emissions.

In the event that Stena might move the ships to a new mooring location, Göteborg Energi and Stena needed to find a solution to be prepared for that. The heat exchangers and control equipment are placed in a container, so that if the mooring location for the ships will relocate, the installation can be moved to the new mooring location. This may also happen in other cities and could be something important to consider.

In the process of designing the control system of temperature and flow for the demonstrator was part of lessons learnt from a test project concerning heating streets used. 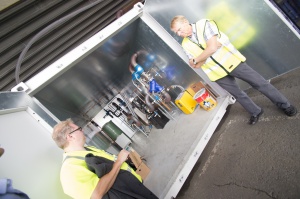 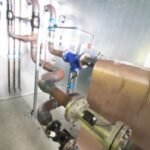 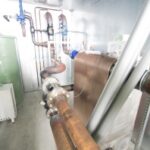 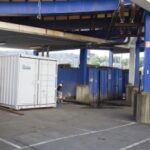 District heating to ships in harbour in Gothenburg