Heat recovery at a hospital in Budapest, Hungary 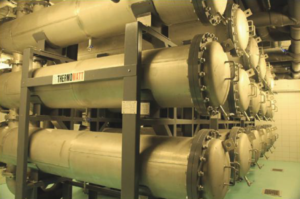 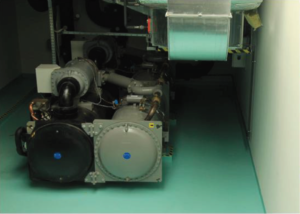 At the military hospital in Budapest, waste water from the sewage system is used for both heating and cooling purposes. The stable sewage water temperatures and a heat pump system ensure a steady and sustainable heating deliverance to the hospital.

The project of using heat recovered from the sewage system was inaugurated in October 2014. The heating and cooling extracted from the sewage water is used internally at the military hospital. The heat pump system is developed by Thermowatt with a total cost of approximately € 2.5 M. Energy savings can however reduce the annual operation costs for heating and cooling purposes with approximately € 340.000.

The sewage water temperature is between 10 and 20 degrees Celsius throughout the year. The military hospital is a relatively large building complex that requires heating and cooling for 40,000 m2. Therefore, the heat pump system has a heating capacity of 3.8 MW and a cooling capacity of 3.3 MW. There are installed approximately two equally-sized water-to-water heat pumps.

When sewage water is used as a heat source, a filtration unit is required to cleanse the water, before it is send to the heat pump units. Approximately 11,000 m3 of sewage water pass the system every day. The total system is placed in an underground car park and occupies approximately 210 m2. The heating and cooling is delivered through air handling units composed of large heat exchangers. Hereby low operation temperatures of approximately 32 degrees Celsius is reached. A system-COP between 6.5 and 7.1 is accordingly reached.