Sustainable reformation for a growing population 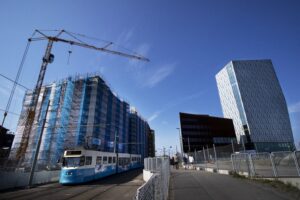 Better aware end-users, more heat-recycling and more biofuel, are required steps for Gothenburg to become a fossil-free city, especially with the city’s continued expansion in mind, according to Alvin Hilmersson Haag, Environmental Strategist for the Environmental Administration in Gothenburg. While Gothenburg is estimated to grow by a third in population until 2035 the city also plans to drastically reduce its carbon footprint by 2030. Since district heating and cooling (DHC) is well established in the city, it is a key factor for success in decarbonizing the energy sector, a large contributor to greenhouse gas emissions. With district heating established in 1952 the city has had over 65 years for expanding, developing and fine-tuning. As of today, the system is not strained but there might be trouble brewing if measures are not taken. DHC important when the city grows The coming 10 years will constitute an interesting decade for Gothenburg. As of 2021 the city will have new environmental goals, strategies and a new energy action plan aiming towards 2030. It is during this time the city is estimated to grow by almost a third in its population. Big infrastructural projects are under way and the city’s skyline is being redefined with new residential areas and high-rises. To face the rising demand for heat and cooling as the population grows DHC is, and will continue to be, an essential piece of the puzzle to reach a sustainable future. Publicly owned district heating The city owns the energy company Göteborg Energi, which distributes all the district heating in the municipality. The company also owns and operates several plants for heating and cooling, including combined heat and power plants, some fueled with biomass, others with oil or natural gas. Additionally, they have a part-ownership in the recycling company Renova, together with neighboring municipalities. Renova’s waste-to-energy plant provides the city with both heat and power. It may seem that the city is well prepared but given the growth and the emission reduction it has undertaken Gothenburg is not without its challenges. Three steps to success The strategy for accomplishing the goal and facing the challenges consist of three levels:

Share This
News Sustainable reformation for a growing population