The Dutch are always finding new ways to use their water. In the city of Rotterdam, the river Maas is now used to cool the huge multi-function building De Rotterdam. Through the heat exchangers that are installed cooling is delivered throughout the year, actually covering the entire need with free cooling as long as the river temperature is below 9°C (48°F). When the temperature rises above that, screw compressor chillers cooled by the river water kick in. At a water temperature above 15°C (59°F), the free cooling is totally phased out.

The building De Rotterdam Vertical city was finished in late 2013 taking four years to complete. It is constructed as a “vertical city”, hosting all the functions needed in a city; housing, offices, shops etc. This mixture of functions requires both heating and cooling to sustain a good indoor climate, and it uses water from the nearby river Maas for free cooling. The water that is used has a temperature that varies between 3-27°C over the year. Cold is centrally generated through three water-cooled compression chillers through a cold water inlet connected to the river New-Meuse. Cold to the homes is provided through a distribution set with a metered connection.

The river water is pumped through a coarse filtration system to prevent solids and fish in the river from getting sucked into the water pumping system. Thereafter the water is processed through an antifouling system that uses chlorine as the antifouling agent. The water continues through a second stage of filters before passing through a heat exchanger.

Problems during the early stage of the project occurred with small organisms, such as clams, that passed through the filter system. When settled, the organisms grew causing problems in the system. An environmental-friendly extra anti-fouling step is used to solve this: thermic shocks. This method is used to prevent small organisms and clams from growing inside the system. The small eggs of the clams can pass the filtering system and stay inside the heat exchanger system. When growing they obstruct the flow in the system. By periodically raising the temperature to a high degree in a short term, called thermic shock, the clams and other small organisms are unable to hold their grip on the inner surface of the system and are flushed out.

The system is also connected to electrically driven river water cooled screw compressor chillers used when the river water temperature is too warm and supplementary cooling is needed. The river water chills the cooling medium that passes through the chillers which in its turn chills the water that is distributed to the buildings. The buildings are then cooled by different heat exchange systems that cool the air. The river water is returned to the river after passing through the chillers and heat exchanger. The water supplied to the building has a temperature of approximately 8-12°C while the returning warmed water has a temperature of approximately 16°C. 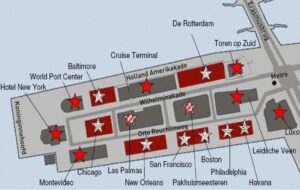 In the basement of De Rotterdam a large space is reserved for a cooling station, to have large compression chillers and a distribution network equipment. All new buildings close to the vertical city will be connected to that. The overall demonstrator’s performance is summarized in the following table according to 5 evaluation criterions. It can be noticed that the assignment of all the scores is directly linked to the values calculated for the Key Performance Indicators, except for socio-economic benefits where a qualitative assessment is carried out based on this cluster’s indicators and on separate interviews.

Important, of course, is that water is available close to the building. Since the water temperature is not very high, longer distances can be used because the thermal losses will still be small.

City of Rotterdam, The Netherlands