Waste-to-Energy: Making use of useless waste

How does the Waste-to-energy technology work? What role can it play in heat and power production, for example as a production unit in district heating systems? This text provides knowledge about Waste-to-energy and waste incineration, including health studies and environmental impact. Cities, energy companies, waste management companies and other stakeholders can learn more about the waste recovery method, its role in recycling and its part in a circular economy.

Some materials are hard to recycle. But there is a way to make use of rubber boots, contaminated packaging and other waste that recyclers don’t want. Waste-to-energy (WtE) is a method for using waste as fuel to produce heat and electricity. The advantages? Reduced climate impact, and an opportunity for cities to achieve a sustainable and financially viable energy production unit.

Waste-to-energy is a collective term for thermal treatment of household and commercial waste where the energy content is used as heat and electric power. The advantages are numerous. Using the energy content in waste – instead of sending it to landfills – will reduce the need for other energy sources for heating, including fossil energy. Less landfill space is required, and the emissions of methan (landfill gas) will therefore decrease. Lastly, heat customers can benefit, as well as cities aiming to be a part of the energy transition.

Waste and incineration requirements
for Waste-to-energy

By using waste as fuel to produce heat and electricity, the energy content of the waste is utilized. The weight of the waste is reduced to about one fifth after incineration. Around 50 percent of the waste fuel consists of household waste. The remaining waste comes mainly from industries, and often consists of sorted fractions with a more homogeneous composition. However, these fractions differ greatly between the different countries and plants.

Normally, sorted combustible household waste is delivered to the plants. It must not contain hazardous waste, batteries, lamps or other electrical waste; nor should it contain packaging or newspapers. These should instead be sorted out and left for material recycling. Metal that is not packaging should also be sorted out since metal is a raw material with very high recovery value. For metals that are present in composite objects, or where it’s not feasible to sort them out mechanically, WtE can provide a solution for recovering them from the bottom ash.

Gypsum should also be sorted out. Gypsum, which is a chemical compound that includes calcium and sulphur, does not contribute energy. Sulphur in the waste is a burden on the flue gas purification. Therefore, there are good reasons not to put gypsum and other sulphur-containing substances in the combustible waste. Requirements are set for incineration properties for the other waste delivered to the plants. For example, the waste should not have too high a moisture content or contain materials that are unsuitable for incineration. Sampling and inspection in conjunction with the waste received at the plant ensures that these requirements are met.

After combustion, residues, such as slag, remain. It consists of materials that are not combustible or do not evaporate during combustion, so-called inert material. Examples of such material are glass, porcelain, iron scrap, gravel and more. 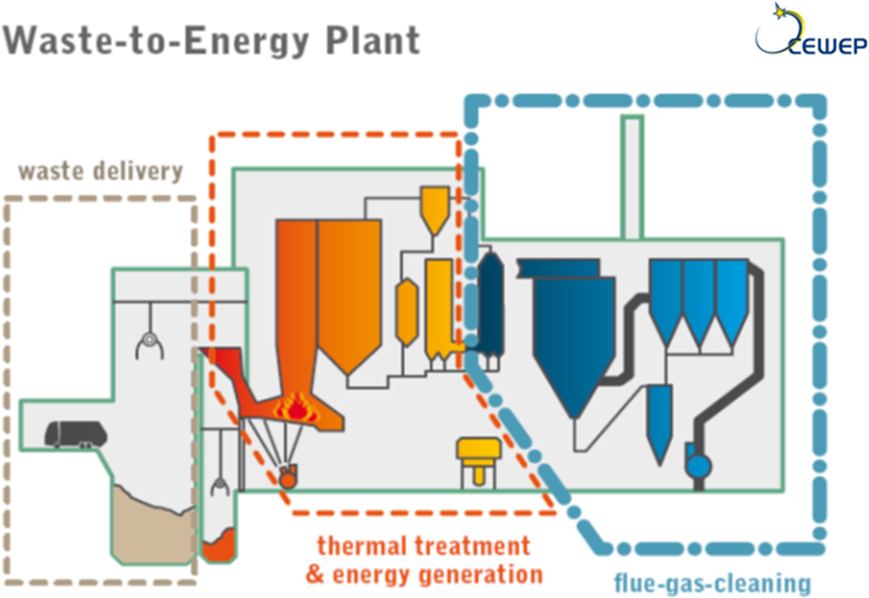 In the combustion process, mainly carbon dioxide and water are released. The flue gases therefore make up 99.9 per cent of substances that are normally present in the air, i.e. nitrogen, water vapor, carbon dioxide and oxygen. The remaining part consists of hydrogen chloride, nitrogen oxides, sulphur oxides and trace elements.

Due to increased emission requirements, improved combustion conditions and better control of waste; emissions of waste from waste incineration have decreased significantly in recent decades. For example, emissions to air of heavy metals from waste incineration have been reduced by close to 99 percent since 1985. Similarly, the total emissions of dioxins to air have decreased from about 100 g to a few grams during the same period, even though three times more waste is burned today than in 1985.

The potential health implications of WTE and MWI (Municipal Waste Incineration) have been discussed, for a long time. Many studies have investigated the health situation. A study in Portugal investigated the levels of dioxins and furans in blood in residents living nearby waste incinerators in Lisbon and in Madeira Island. The findings from this investigation suggest that incineration does not impact dioxin blood levels of nearby residents (Reis, o.a., 2007). This is supported by another study in Tarragona, Spain (Vilavert, Nadal, Schuhmacher, & Domingo, 2012). The British Health Protection Agency concluded that the risk of potential cancer due to residency near municipal waste incinerators is exceedingly low and probably not measurable (Maynard, Walton, Pollitt, & Fielder, 2010).

In one of the most extensive studies so far about risks of MWI there were no evidence for association between MWI proximity and infant health outcome (Ghosh, o.a., 2019). There are also studies that have been monitoring the effect on crops near three different MWI-plants during multiple years (2004-2013). The results showed that the emissions did not affect the quality or milk from cows who had been fed cattle feed from the area in the study (van Dijk, van Doorn, & van Alfen, 2015).

Waste to Energy in a Circular Economy

There is an ongoing discussion about waste incineration, and how it might be conducive to reuse and recycling. According to the EU Framework Directive for waste and the Swedish Waste Ordinance, waste incineration with efficient energy recovery is to be regarded as waste recovery.

In a circular economy the value of products and materials is maintained for as long as possible. Waste and resource use are minimised, and when a product has reached the end of its life, the resources are kept within the economy to be used again and again and create further value. The waste hierarchy is clear: Waste incineration is not a competitor to reuse and recycling. The value of products shall be maintained in the top of the waste hierarchy as long as possible. But when the products no longer are suitable for recycling, they still have value as fuel for heat and power production. 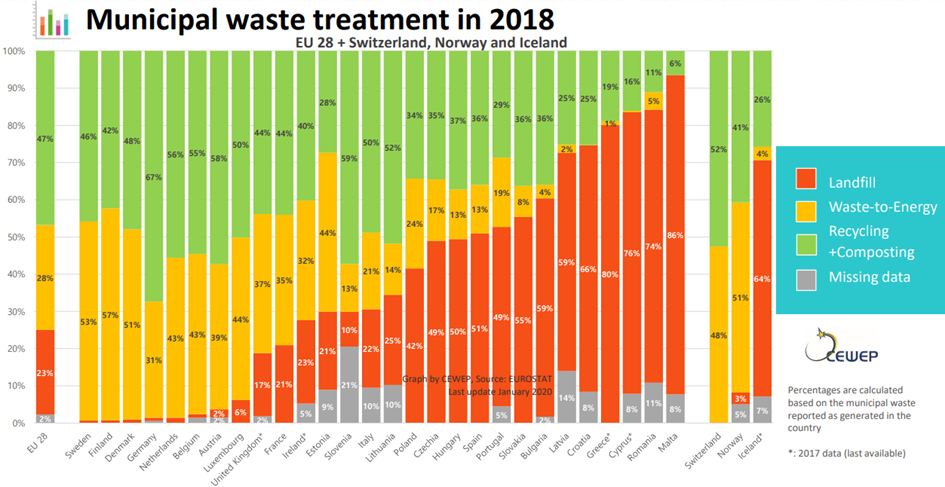 Figure 2 above shows how the waste is treated in the EU countries. It illustrates that the countries with the highest Waste-to-energy treatment also have the lowest share of landfill and the highest recycling shares. Many countries have a landfill ban or are in the process of introducing one. Besides materials that for different reasons are not suitable for material recycling such as dirty, mixed, and degraded materials; there are also materials that are contaminated in other ways that make them unsuitable for recycling. The WtE plants can destroy many of the organic pollutant and collect inorganic substances that we don’t want to spread or recycle into new products.