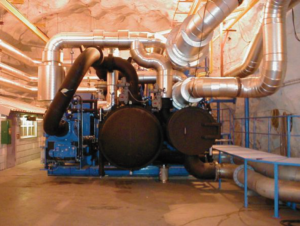 In 1989 the local district heating company in Sandvika, a suburb to Oslo, started operation of two heat pumps utilizing sewage water for both heating and cooling purposes. The heat pump facility called Sandvika Energisentral have since produced cheap and environmentally friendly energy for the local consumers.

With urban expansion in Sandvika throughout the 1980’s came an increased need for district heating. It was decided, that a new heating central was to utilize excess heat from sewage water in two 6.5 MW heat pumps. The system further enabled district cooling, and the project was one of the firsts to combine district heating and district cooling in northern Scandinavia. Since construction, delivery of both heating and cooling have increased. As modern office buildings install more and more data units, the district cooling demand increase. The project further includes defrosting of pavements in winter, which is a popular need in urban northern communities.

With the project come lowered energy prices and environmental benefits as fossil fuels are not used to produce district heating and cooling. As the system is optimized, the total amount of refrigerant R134a used in the heat pumps is lowered.

Excess heat from sewage in Hamburg and Singen, Germany