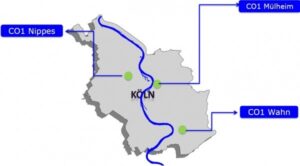 The main objective of Cologne’s Demonstrator is to recover excess heat from sewage water and use it in decentralized local heating networks by supplying heat and DHW to local school buildings. 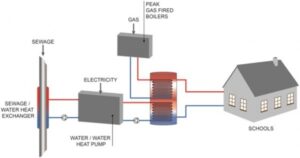 Figure 2. The main components of the demonstrator system.

The CO1 demonstrator consists of three different operation sites; Wahn, Mülheim and Nippes. In all sites, sewage source heat pumps recover heat from sewage water. The main components of the system are: heat exchangers, water-to-water heat pumps, gas boilers and heat buffer tanks. One innovative part of the demonstrator is the heat exchanger, which is installed inside the sewage pipe. This indirect heat extraction technique is used in two of the demonstrator sites (Wahn and Mülheim). In the third site, a direct heat extraction technique is used. This means, part of the sewage water is by passed and pumped direct to the evaporator of the heat pumps.

The overall demonstrator’s performance is summarized in the following table according to 5 evaluation criterions. It can be noticed that the assignment of all the scores is directly linked to the values calculated for the Key Performance Indicators, except for socio-economic benefits where a qualitative assessment is carried out based on this cluster’s indicators and on separate interviews.

The assessment of potential for replication of demo technologies is based on the results of the whole monitoring phase. General replication requirements for demo technologies are assessed through seven criterions including availability of the exploited source, adaptation to different climate conditions, ease of authorization, implementation and operation, required investment cost.

Considering the replication potential at European level, more than 84% of EU population is connected to a sewage network, share which increases if focusing the analysis on urban areas only; this means that the replication potential for the Cologne demonstrator is particularly high, also due to the adaptability to different climate conditions and the use of conventional technologies that are economically viable. According to the analyses carried out within other research projects (e.g.: Stratego), 5% of total heat demand could be covered with heat recovered from sewage systems in cities and towns.

The technology demonstrated in Cologne could be replicated in several places, within the city of Cologne and in other cities over the EU, provided that some minimal requisites are verified. To ensure the economic feasibility of heat recovery from sewage the following aspects are important:

More information: Guidelines for the replicability of the Cologne Wahn Demonstrator

The financial model used in the project is Energy Supply Contracting. RheinEnergie AG planned and operates the heat recovery plant in the buildings. External companies, such as Vießmann (heat pump manufacturer) and URIGH (heat exchanger manufacturer) installed the equipment. The return of the investment and the maintenance costs are recovered by the sale of heat.

Following awareness was gained within the project:

All project phases were successfully completed and the system is in operation since October 2013. However, the measurement devices did not start operating until March 2014. For this reason, the data collection of this demonstrator site started in the before mentioned month.

The following challenges occurred during the operation phase:

All project phases had been successfully completed and the demonstrator site Mulheim started operation in November 2014.

After some delay of the heat pump delivery, the operation site Nippes accomplished all project phases and started operation in February 2015. However, in May 2015 due to malfunctioning of some systems components the operation stopped. The demonstrator site in Nippes is not using any heat exchange, but rather the sewage water is been bypassed to a retention basin where a well pump sends the water to the evaporator. This variation in the layout has not been successful. The operation of the heat pumps has been very unstable. The following unexpected issues have raised:

Several measures at the sewage pump seem to solve the problems so far, but there are few operating hours to prove that they work stably. Test and optimization of the evaporator will start in the next heating period (10/2017).

Following the monitoring methodology set up to analyze the Celsius demonstrators, relevant key performance indicators are identified for this technology. The methodology aims to quantify the impact of the new demonstrators with respect to the specific baseline situation. The base line situation refers to the previous heating technology, in this case, gas boilers. The following table shows the calculated parameters for the baseline situation of the year 2014 for both demonstrator’s sites. This calculation changes every year, since each year the heat demand varies.

Once the parameters for the baseline are calculated, they are compared with the measured parameters of the new technology in order to obtain the KPI’s. The following table shows the calculated KPI’s, since the demonstrator sites in Cologne went online.

The following chart shows the KPI “primary energy savings” of the demonstrator sites in Cologne. This KPI is usually higher in the demo site Wahn, as the heat demand is always higher. The variation over the years of this KPI, depends on the operation hours of the heat pump and the outside temperatures, which varies the heat demand. Maintenance and other factors affect the value of this KPI too.

Excess heat from sewage in Hamburg and Singen, Germany