Gothenburg, a pioneer in green bonds

If you are looking to make your city “greener”, look to your finances. Introducing green bonds into your city’s financial planning is a great way to get funding for climate-positive projects and at the same time shift the city’s financial capital into a greener shade. This article provides a short introduction to green bonds using the first city in the world to use green bonds, Gothenburg, as an example.

What is a green bond?

First off, what is a bond? A bond is a type of loan where an investor lends money to the borrower, a company, municipality, state, or government. A bond is usually used to finance different types of projects. A green bond is delimited to only finance “green” projects, where “green” is defined by the borrower, the one who sells the bonds. Green bonds are usually aimed towards projects that somehow reduce climate impact, benefit biological diversity or in other ways has the best interest of the climate and the environment in mind.

The birth of Green bonds in Gothenburg 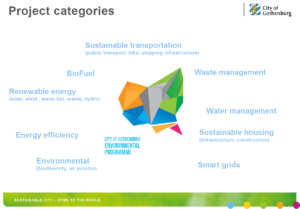 In 2013, Gothenburg was the first city in the world to issue green bonds to finance green investments. As there were no real frameworks or previous examples to go after, Gothenburg had to find its own way, step by step. To define what type of projects the green bonds would finance, the city’s treasury looked to their colleagues at the environmental administration. The financial officers were no experts in environmental issues in the same way the environmental officers were no financial experts. Teamwork between disciplines was needed to make the green bonds a successful financial instrument. As a result, the definition for what kind of projects the green bonds would finance, the framework, found its base in the city’s climate strategy. Sustainable housing and transportation, waste and water management, energy efficiency and renewable energy were some of the identified areas were green bonds would finance projects. The focus is on mitigation and adaption to climate change.

As transparency is important, both for investors and for the public, every project that has been funded in the seven years since the start, is available to read about in impact reports that are released annually. In these impact reports we find that many district heating and cooling projects in the city have been funded with green bonds. For example, in the early days of Celsius, the project got green bond funding for a demonstrator project where large international ferries used district heating instead of burning oil in generators and heaters, when docked at the quay. There are also examples of sustainable housing and energy efficiency measures, all connected in one way or another to the district heating energy system. Click here for more information about the Stena Line ferry demonstrator. 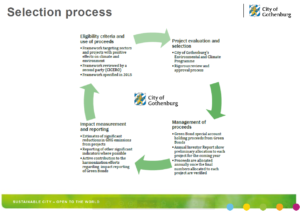 To make sure that the funded projects have high quality and will have the desired impact, there is a rigorous selection process before a project is accepted. Projects are evaluated both in terms of their economic feasibility but also from the estimated reduction of greenhouse gas emissions or other beneficial environmental effect. The Green Bond Framework on which projects are selected is thoroughly reviewed by a second party (CICERO) to ensure that the quality remains high. The framework as such is also regularly reviewed and specified to make sure that the green bonds are in line with the city’s ambitions and goals.

Fredrik Block, portfolio manager at the City of Gothenburg and involved in the green bonds, relays some advice for cities looking into setting up their own green bonds. First off three questions you need to consider and then two solid pieces of advice. This is “Fred’s Fast Five”:

Green bonds is a great instrument to have in a city’s financial toolbox. By earmarking funds for green projects, you ensure that there will always be money available for projects aiming to reduce the city’s climate impact or improve biodiversity in the city. Setting up a framework is important, and the focus of the framework should be to forward the city’s advancement to reach its climate goals. Shift your city towards a greener future, both financially and energy system-wise, with green bonds.

Click here to listen to the CELSIUS Talk on funding solutions for district energy development which includes a presentation from Magnus Borelius, former head of group treasury at the City of Gothenburg, where he describes how the city developed the green bonds.

Share This
News Gothenburg, a pioneer in green bonds