Water has a large potential to be used as a source for free cooling. At least in the parts of the world where rivers, lakes and the sea have a significantly lower temperature than the desired indoors temperature. Through a heat exchanger the cold could then be passed on from the water to a building’s cooling system. Challenges to be addressed include filtering and fouling. Filtering is needed to keep out fish and other larger structures. Fouling causes reduced heat transfer and reduced efficiency of the heat exchanger.

The system is often complemented with a heat pump or electrical chiller in order to secure the cooling supply. It can be used in a single building but also in a district cooling network. This type of free cooling is a sustainable cooling alternative, as well as district cooling and heat pumps. They use less electricity for the same cooling capacity as compared to a system with only electrical chillers. The employment of free cooling also reduces the use of heat pump refrigerants. 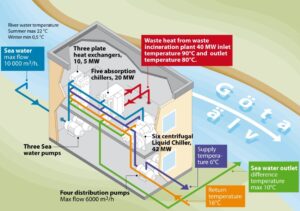 There are many examples of the use of river cooling. In Celsius there are two demonstrators that are used as good examples. The first is in the City of Gothenburg, which uses free cooling provided by the river Göta älv. The free cooling from the river is supplemented with cooling from absorption heat pumps that uses waste heat and electrical chillers[1].

The other demonstrator uses river water in De Rotterdam Vertical City. De Rotterdam Vertical City is a building with a total floor space of 160,000 m2. Water from the nearby river, Maas, is used for free cooling. The system is also connected to electrically driven water cooled screw compressor chillers used when the river water temperature is too warm and supplementary cooling is needed[2].

The optimal choice of system depends on the issues concerning the use of water from sources such as the river, lake or the sea, for cooling. The restrictions with these systems are mostly problems concerning fish safety, water quality, fouling and corrosion.

Fouling is one of the main issues with using water from the river, lake or the sea, for cooling. When problems with fouling occur the heat exchanger performance is affected by factors such as reduced heat transfer and reduced efficiency. Deterioration of the equipment is also a problem concerning fouling and corrosion issues which lead to higher maintenance and service costs.

When evaluating cooling systems using river water for free cooling, the river variables such as temperature, depth and flow rate are also significant for the efficiency of the system. It is also important to investigate different regulations concerning allowable amount of discharge of chemicals used in antifouling processes as well as regulations concerning allowable increase of river water temperature. These issues may occur when the processed warm water is returned to the river.

In this section focus will be on filtration and fouling issues since they affect the heat exchange process as well as the life of the equipment. These factors need to be assessed to determine which technical solution for heat exchange should be implemented and not only what type of heat exchanger should be used.

The water that is extracted from the river is first filtered before it can be used in the heat exchanger. Usually three filter systems are used but the number of filtration systems varies from case to case.

The first filter is generally a coarse filter that ensures that fish may not be sucked into the water pumping system. The coarse filter is usually followed by a fine filter which in some cases is followed by an even finer filter. The secondary filters are designed to protect the heat exchangers. Sometimes some sort of tube cleaning system may also be used.

One of the concerns regarding extraction of river water for the use of free cooling is the fact that the solids level in river water is high. The use of filters decreases the fouling effects as well as prohibits particles and contaminates in the water from getting to the heat exchangers. For these reasons the filtration system that will be used needs to be durable. To ensure longer service operation of the filters it is important to keep them clean, which also ensures that clean water returns to the river.

The water from a river, lake or sea water source for cooling causes deposits to develop on the surface where the water makes contact with the system, called fouling. It is affected among other factors by the water composition, microorganisms in the water, water temperature and the water flow rate[3].

With cooling systems using different types of water sources one important fouling process is biological fouling, resulting in problems such as colonization and growth of different types of organisms[4]. When problems with fouling occur the heat exchanger performance is affected by factors such as reduced heat transfer and reduced efficiency. Another issue is also corrosion problems leading to deterioration of the equipment, impacting on the life of the heat exchanger. As a result fouling and corrosion issues lead to higher maintenance and service costs.

The organic matter in the water is dependent on the season. Spring and summer have higher organic activity compared to autumn and winter thus the same amount of chlorine will most probably not be needed during the different seasons. Balance between optimizing the antifouling system over different seasons and at the same time minimizing the discharge to the environment needs to be established to achieve optimum environmental benefit and at the same time achieve optimum operation of the equipment.

An interesting environmental friendly anti-fouling method is using thermal shocks. In Rotterdam demonstrator Vertical City this method is used to prevent small organisms and clams from growing inside the system. The small eggs of the clams can pass the filtering system and stay inside the heat exchanger system. When growing they obstruct the flow in the system. By periodically raising the temperature to a high degree in a short term, called thermic shock, the clams and other small organisms are unable to hold their grip on the inner surface of the system and are flushed out. Examples of the other antifouling processes are to use oxidants such as chlorine dioxide, ozone and peracetic acid, however the latter are not commonly used in cooling circuits. There are also antifouling solutions such as coating, lining, and treatments with UV radiation or electric pulses. Which solution to choose depends on its cost, the type of cooling water used, the availability of the process and of the technical solution but also environmental aspects.

When choosing an antifouling system different aspects need to be considered. A thorough evaluation needs to be performed on which antifouling system would be best suited for a specific construction as well as how to optimize its performance. This will help keep the cooling system in good condition, minimize maintenance and service costs but it will also minimize potential discharges that are harmful to the environment.

Compared to using conventional cooling solutions, such as cooling by air-conditioning units, electrically driven chillers or cooling towers, both systems utilize less electricity since free cooling can be used when the river water temperature is low enough.

Another factor both systems have in common is that reduced amount of refrigerants are used compared to other conventional systems. If compared to systems where cooling towers are used or systems using compressors for cooling, these systems also have the advantage of emitting less or no noise to their surroundings. Another important aspect with both systems is that since reduced amount of electricity and refrigerants are used the systems decrease emissions compared to conventional systems.

The difference between the systems is in the choice of heat exchanger and chiller solutions. The Gothenburg Energy system utilizes absorption chillers supplemented with electrically driven chillers, while the De Rotterdam Vertical system utilizes only electrically driven water-cooled screw compressor chillers. Both systems are used only when the river water temperature is too high to use free cooling. However since the Gothenburg Energy system combines the electrical driven chillers with absorption chillers, less electricity is consumed compared to a system only using electrically driven water cooled screw compressor chillers.

With the information provided at this time of the systems and given their similarities, improvements that may be evaluated are factors such as that the Gothenburg system utilizes the river water for the district cooling grid. The Celsius demonstrator should be able to utilize the district heating network, used for heating De Rotterdam Vertical City, and the excess of heat generated to produce district cooling by heat pumps. It should be able to use river water in a similar way as in the Gothenburg system to provide district cooling for a larger area than just to the buildings constituting De Rotterdam Vertical City.

Improvement possibilities to the systems that should be evaluated are assessment of antifouling optimization, evaluations on the type of heat exchange system and type of chillers used, where winnings can be made on electricity consumption as well as refrigerant use. Assessments should also be made on the piping system transporting cooling to the buildings which should be well insulated to minimize heat losses. The cooling efficiency can also be improved by using well insulated systems to transfer the river water the needed distance.

Protecting marine life and equipment needs a good filtration system. Filters decrease fouling effects, prohibiting particles and contaminants in the water from getting in to the heat exchangers. To ensure longer operation of the filters it is important to keep them clean, which also ensures that clean water returns to the river.

Assessments should also be made on the piping system transporting cooling to the buildings which should be well insulated to minimize heat losses. The cooling efficiency can also be improved by using well insulated systems to transfer the river water the needed distance.