​Cities dominate energy demand. About 74% of Europe’s population lives in cities, and urban areas account for 60-80% of carbon emissions.[1] Weaning our cities off fossil fuels and replacing these with geothermal and other renewables is key.

Geothermal district heating and cooling (DHC) provides comfort with space heating and/or conditioned air to each citizen in individual housing, commercial, industrial buildings, and public facilities while reducing carbon emissions. The same geothermal resource can be also used for producing heating, cooling, electricity and allowing thermal storage in the underground, while protecting consumers against volatile fossil fuels prices. In this sense, the French agency ADEME confirmed that when applying geothermal to existing DHC networks in France – it can reduce the household energy bills to as low as €15 per MWh compared to fossil gas, which had the lowest cost of €61 per MWh. It is important to underline that the above-mentioned costs for fossil gas does not include a price on its carbon emissions.

According to the European Geothermal Energy Council (EGEC), Europe is the leading global market for geothermal DHC with 5.5 GWth of installed capacity in 2019.[2] This year also marked a continued increase in the deployment of geothermal DHC systems in Europe, as 11 new systems were commissioned during 2019, adding 130 MWth of additional capacity. 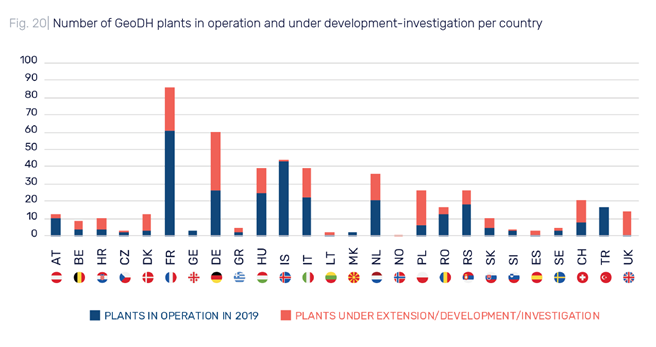 The trend of ongoing projects indicates a rapid acceleration in leading markets. A concrete example in this sense is the Netherlands – the country moved from no use of geothermal DHC to the top 5 European countries with the largest geothermal installed capacity in 12 years.

What is needed to further enhance this trend?

Geothermal DHC systems can be installed almost anywhere in Europe, covering 25% of the EU population. Local authorities can now use available resources to start planning and implementing geothermal heating and cooling:

[1] The Conversation, We examined 885 European cities’ plans to tackle climate change – here’s what we found