The sun is an abundant source of renewable energy that are available to use. If we could harvest a fraction of the energy that the sun radiation om the earth every day, we could supply the entire worlds energy consumption. We just need to develop the technology. This article describes how the solar energy can be harvested and used to supply district heating networks.

Solar thermal collector fields can be used to supply DH networks. Because of the fluctuating nature of solar radiation, both diurnally and seasonally, they will have to be combined with either a storage facility or a suitable alternate source for balancing. Advances in systems design and component efficiency have resulted in solar thermal energy being an economically viable source for DH, even in Northern Europe. Although contiguous solar fields on vacant land are the most common, favorably oriented roofs and facades can also be used for panel placement.

Solar thermal panels generate heat by capturing solar radiation and heating up a fluid. Although direct radiation (sunlight) is the most favorable (and allows for a high temperature output, sometimes boosted even further using concentrating mirrors), some types of panel are able to provide output using indirect radiation (overcast sky) as well, albeit at a much lower output temperature. Although solar photovoltaic panels can generate electricity that may also be used for heating, their overall system efficiency for this purpose is significantly lower and therefore not the focus of this article.

Here, the two main categories are the solar feed-in point and the size of the solar district heating system. Central heating systems feed the heat into the main heating plant that further distributes the heat into the main network. It is also common for these types of systems to have large heat storages in close connection to enable a high solar fraction and the ability to get a more evenly distributed supply curve.

Distributed systems on the other hand feed the heat directly into the networks primary side without any thermal storage. Instead, the network itself can act as storage if the collectors provide a minor amount of heat in comparison to the total load in the DH network. These types of distributing systems offers a business model where a net-meter is installed and the plant is owned by the building owners who trade the solar heat according to a net-metering contract with the district heating net owner, similar to what is used for grid-connected PV plants.

Solar energy is an intermittent source that gives the most energy during days with high solar irradiance and a high ambient temperature meaning that the supply and demand curve for heating is not always a perfect match. Thus, there is a need for storage facilities to enable storage and the possibility to deliver heat when needed to the district heating network. This can be done either by a separate storage unit or by using the DH network itself as storage.

The intermittency of solar energy also calls for additional reliable base load heating sources to cover the demand during days with insufficient irradiance. If the peak load is supplied by fossil fuel boilers, integration of solar energy has a very positive impact by directly decreasing the use of expensive and CO2 intensive fuels on the margin. However, in some places the heat is supplied via waste incineration plants, waste heat from the industry or from combined heat and power plants (CHP) producing cheap heat. In these cases, it would be expensive and difficult to control the base load supply in relation to solar intermittency, since they are designed to operate at full load. A decreased load in these plants will lead to a lower efficiency, lost waste energy, and thus more losses and more emissions.

So, from a holistic perspective, careful consideration and analysis shall be made before integrating solar heat to an already existing network to ensure that the effects on the other systems are not substantially affected in a negative way. The advantages of a successful integration of solar heating in the DH network is a system with decreased use of polluting and expensive facilities since energy is generated from a fuel and emission free energy source. Economically the benefits all depend on the competing energy sources in the network that will be replaced.

High taxations on alternative fuels and more and more integration of other renewable energy sources in the overall energy system are two things which favor solar district heating. Denmark is an example where the weather conditions are not optimal for solar heating, but where there has been an ongoing expansion of the existing SDH network for several years and where some of the world’s largest SDH fields are located. This is due to the high taxation on competing energy sources (e.g. gas) and an increasing share of renewable energy sources in the overall energy network.

Increased power generation from intermittency sources, i.e. wind and solar PV, enlarges the volatility of the electrical spot prices. This means that electrical (and thermal) production from CHP plants will be less profitable in the future when the electrical spot prices are low. Future expansion of PV modules and wind power might lead to a demand of larger thermal storages and collector fields as the CHP plants will run less frequently (Sperber, 2014), i.e. more thermal energy is required from other sources and the demand to store this energy will be more vital.

Apart from the technical aspects of system integration, competing heat sources and external factors such as fuel prices, legislations and taxations it has been proven that the social aspects are important for a successful integration of solar heat in the DH network (Dalenbäck, 2010). Dalenbäck’s report gives examples of various success stories with SDH integration in Denmark, Austria, Germany and Sweden.

The implementation of an SDH requires a major initial investment while the operation costs are very low. This calls of a careful and detailed risk assessment and investigation before the final call is made. Local partners will most likely lack the knowledge on how to address this and this fear might lead them to abandon the idea of SDH. In Austria, this was initially dealt with by creating an energy service company (ESCO) that made the investment, operated the plant and sold the heat. As this turned out to be a success, the concept was brought upon to other solar heating plants in Austria and the lessons learnt was the need of experienced project partners who are devoted to their mission.

Solar collectors for district heating purposes can be place both on the ground, on roofs (as in Gårdsten) or besides roads to fill multiple functions, for example as noise barriers. Collectors mounted on the ground is the cheapest solution (unless the cost for land is very high, > 50 €/m2) (Sorensen, 2012). Roof mounted solutions are more expensive since the installation cost will be higher. However, these kinds of installations can be combined with refurbishing of an already existing roof and be roof integrated and thus fill multiple purposes and replace the need of roof tiles, etc.

Ground mounted collector fields can be found in e.g. Sweden, Austria, the Netherlands and Denmark and usually consist of larger collector modules (> 10 m2) placed in parallel rows of up to 20 collectors and oriented due south (solar azimuth = 0°). When analysing the economic feasibility for land mounted collectors, the following equation can be used to estimate the investment cost, Pland, location, needed for the land area of the installation (Battisti, 2012):

Another thing to consider when doing larger field installations is the heat losses due to long transmission pipes which will influence the annual heat output of the field. The relative heat loss in the piping compared to the field output can be calculated using:

It’s evident from the figure below that the relative pipe heat loss decreases with an increased size of the collector field area. The economic benefits of a larger collector field area are further enhanced when also analysing the investment cost per storage volume (Schmidt & Miedaner, 2012). 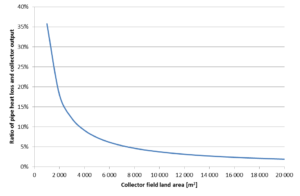 Normally, solar heat cannot compete financially, without any subsidies, with heat produced at a lower price than 3 € cents/kWh in Northern Europe and 2 € cents/kWh in Southern Europe (Sorensen, 2012). However, there are examples in Denmark for instance where solar heating is a fully compatible alternative to district heating integration and competes with natural gas fired combined heat and power plants.

The fact is that SDH in DH systems with biomass or natural gas CHP plant will become more feasible in the future with increasing prices on both biomass and natural gas together with an increased share of renewable energy generation (wind, PV, etc.) in the electrical grid which causes a volatile grid.

The latter case is what is seen in Denmark today where the strong development of wind energy has created a situation where electricity prices are very low during certain windy periods which make the CHP plants less favourable and the heating is instead covered by boilers with high fuel prices. This in turn makes the solar energy alternative more economically competitive, especially when considering the future increase in fuel prices.